How To Use Chalk for Rock Climbing

HEADS UP! This blog has been UPDATED! Scope the new version here: https://frictionlabs.com/blog/updated-how-to-use-chalk-for-rock-climbing

HEADS UP! This blog has been UPDATED! Scope the new version by CLICKING HERE.

What’s the right way to put chalk on my hands? Am I putting on too much or too little? How often should I reapply?

Whether you’re new to the gym or a more experienced climber, you may have wondered about these or other questions regarding the right way to use chalk.

Here’s a quick primer on chalk and how we, as climbers ourselves, recommend you use it.

In case you haven’t noticed, your body is a moisture-emitting machine. All day long it’s generating and secreting sweat, oils, and other sources of moisture, much of which gets pushed out of your pores and onto the surface of your skin. When you exercise, you create even more. And it usually sits on your skin until something removes it.

For some athletes, this extra moisture doesn’t significantly affect their performance. For rock climbers though, just a bit of moisture on your hands can be the difference between success and failure. As a result, climbers use chalk to dry sweat and other moisture on their hands, increasing friction and improving their grip on the holds.

Most climbing chalk you’ll find is made from Magnesium Carbonate. This is the same compound that gymnasts, weightlifters, and other athletes will put on their hands in order to improve friction and grip. Though it is sometimes available in other colors, it’s usually white.

Climbing chalk commonly comes in a few different forms: block, loose, or liquid. Which one you use is a matter of personal preference.

Block chalk is a compressed, solid chunk of Magnesium Carbonate. To use it, you break it apart as much as you want—a common method is to put the block in a chalk bag and step on it until it breaks apart to the desired size.

Loose chalk is block chalk that has already been broken up. It ranges from hardly broken up and chunky to a fine powder. At FrictionLabs, we offer our chalk in three distinct blends. They’re all chemically the same (and excellent) - which one you use just depends on your personal texture preference.

Sometimes loose chalk will be sold on its own and other times it will be put into a chalk ball, which is a soft, porous mesh ball designed to hold the chalk, prevent it from spilling, and limit the amount you get on your hands. Compared to block chalk, the advantage of loose chalk is that you just put it in your chalk bag and don’t have to worry about breaking it up. The downside is that you have less control over the texture, and it might be too fine for your taste. Some people also don’t like the feeling of chalk balls and say it’s like rubbing a sock on their hands.

Liquid chalk is Magnesium Carbonate mixed with alcohol. You squirt it onto your hands and spread it around like lotion. The alcohol dries quickly, leaving behind a chalk residue covering your hands. Compared to block and loose chalk, the advantage of liquid chalk is that it is easy to apply, cleaner, and sometimes longer lasting. The disadvantage is that the alcohol can dry out your skin too much and you also have less control over the amount of chalk on your hands at any given time.

At FrictionLabs, we have our own take on liquid chalk - Secret Stuff. Instead of a lotion that you squirt, Secret Stuff has the feel of a nice facial cream and is also MUCH higher quality Magnesium Carbonate than other liquid chalks.

FEATURED PRODUCT
Secret Stuff
Get It

FEATURED PRODUCT
Secret Stuff
Get It

Prior to a climb, if you have a large chalk bag/bucket, put one or both hands in the bag, grab some chalk, spread it from your palm to your fingertips, then let the excess pour back into the bag and pull your hands out. Try not to make a mess by pulling out too much chalk that isn’t already rubbed into your hands. If you have a small chalk pot, put the fingers of one or both hands inside, get some chalk on your fingers, then pull them out and either rub both hands together or, if you’re mid-climb, rub your fingers together. Whether you have a bucket or a small pot, at this point you should have a bunch of chalk on your hands and they should be out of the bucket/pot. If you still see loose particles, blow away the excess. You should now have a smooth, uniform layer of chalk covering your fingers, but minimal loose particles since you blew them off.

Now get climbing before new moisture starts to eat away at the chalk!

Everyone’s body produces moisture differently, so some people need to reapply more than others. Generally speaking though, most climbers will reapply at the beginning of each attempt and possibly again before a particularly difficult move in the middle of an attempt. It is possible to have too much chalk on your hands—remember, what you’re looking for is a fine layer of chalk covering your fingers, but not a bunch of loose or caked chalk sitting on there.

Over time, you’ll find your sweet spot for the amount of chalk you like on your hands. You’ll get a feel for when you need more based on what your fingers look like and how moist/dry they feel.

That’s it! Now that you know how to put it on, get some chalk for yourself.

At FrictionLabs, we spend a lot of time thinking about chalk, so we hope this guide is helpful to clearing up any confusion. Do you have a different method for applying chalk? Wondering about something we didn’t discuss? We’d love to hear about it, so leave a comment and we’ll be sure to get back to you!

Whether you’re a new climber or a seasoned pro, you crave the moment where your grip does more than you thought it could. That split second is nirvana. At FrictionLabs, we help climbers find that feeling. We use science to engineer the best chalk for rock climbing success. 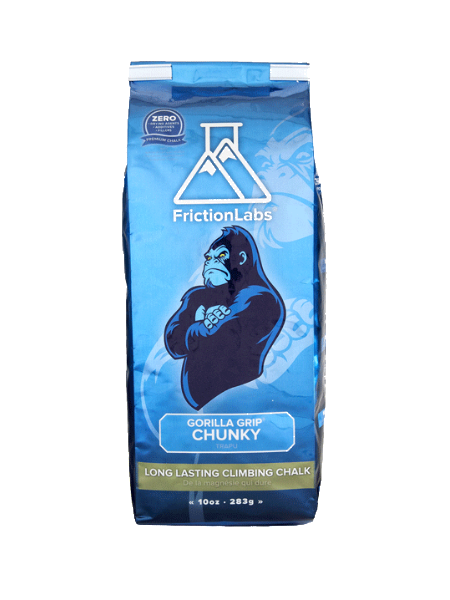 Alcohol Free Secret Stuff
Check It Out
Subscribe
We only send emails we'd be psyched to receive ourselves.